So You Think You Can Write Grand Prize Winner Lauren D.M. Smith shares her excitement on getting The Call! 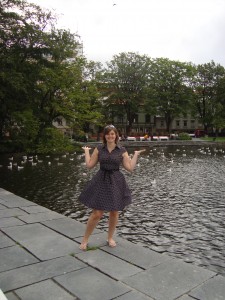 Oddly enough, my story starts not with me but with my brother. He’s been writing as long as I have, if not longer, and was the one who first told me about So You Think You Can Write.  I’ve always dreamed of getting published, so I thought, why not? Worst case, I’d just add to my ever-growing collection of rejection letters.

I’ve written several novels with romantic elements before, mostly fantasy and young adult, but never a true romance so this was uncharted territory for me. I had a couple of ideas floating around that I thought would be a better fit, but my brain refused to let me work on anything but the story of Evony and Galen, so I eventually stopped fighting and just ran with it.

At first I was convinced I hadn’t even made it past the first round since everyone else talked about the Wattpad messages they got saying they’d made it. I never got one, but when I went to work and checked Wattpad to see who’d made the Top 55, I noticed my story had been added to the list. I initially thought it was a mistake until I scrolled through and found The Emperor’s Arrow there among the other entries.

I shouted loud enough to scare several of my coworkers.

From there, I harassed all of my Facebook friends and Wattpad followers to vote, while I anxiously watched the vote total, obsessing over every rise in the number. When I found out I made the Top 25, I was absolutely ecstatic. An editor was going to read my full manuscript, something I’d never had happen before!

When I got into the Top 10, I nearly cried even though I was at work. It was an affirmation that my writing had potential, that someone in the industry thought I had a shot of getting published. I was on Cloud Nine.

Then, in the middle of So You Think You Can Write fever, my boyfriend proposed to me. It was Halloween, we were both dressed like Doctor Who characters and he referenced Gravity Falls in his proposal, so it’s probably one of the nerdiest engagements ever. 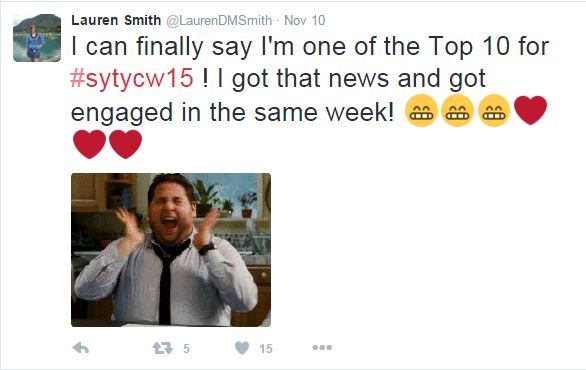 With that double hit of happiness I actually became afraid something horrible was coming—there was no way I could be that happy without consequences. When the final voting opened I began a daily barrage of messages on Facebook and Wattpad, getting everyone I knew to vote for me.

If I was obsessed before, now it was so much worse. Not being able to see the number of votes slowly drove me crazy(ier). Then the voting closed and I couldn’t even harass people—there was nothing to distract me from thinking about the contest results.

Knowing the winner would be announced on November 19th, I assumed Harlequin would call the winner on the 18th. I kept my phone charged and on me all day but heard nothing. Again convinced I was out of the contest, I did my best to focus on my upcoming trip to Namibia.

I had booked the 19th off to finish preparations for my trip, but all I could think about that morning was So You Think You Can Write. I checked the website but didn’t see an announcement, so I headed to Twitter where I knew the other finalists spent a lot of time talking to one another. But no one else had heard anything either.

I joined in the conversation, tweeting my guess that maybe there was a tie and that’s why no one had heard. Two minutes later my phone rang. I didn’t recognize the number, but as soon as Angela James said her name, I began to go hot and cold.

My voice went up about six octaves as we talked. I was sitting on the couch in my pajamas, frantically fanning myself with one hand as I fought down tears. Most of the call is a blank and I think I was babbling. My brain just kept running around and around the idea that I’d really won.

When poor Angela finally hung up, I started crying and called my mom. My mother, who rarely swears, actually dropped the f-bomb when I told her and nearly started crying herself. As soon as I finished talking to her I texted my fiancé at work, who apparently then told the whole factory.

In just one month I got engaged, won So You Think You Can Write, and went on a safari to Namibia. In short, this has been the best month of my life and I wouldn’t change anything. Even if at times I thought the waiting would kill me or make me crazier than I already am.

Do you dream of publishing with Harlequin? visit writeforharlequin.com for writing tips, author posts, contest news and more! 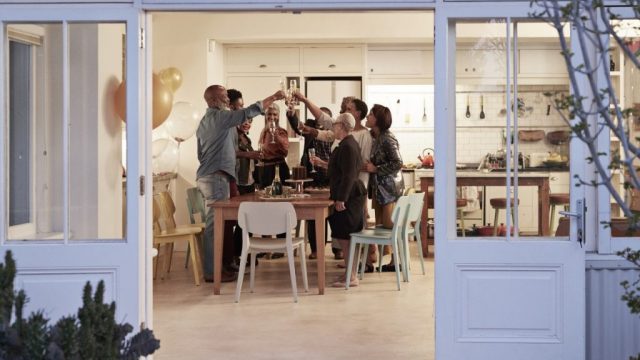 Awesome Call Story, Lauren! I loved the inserts of your Tweets here, which I recall seeing on Twitter, when the #Top10 were waiting to hear who won.

Thanks so much for sharing how it all unfolded for you. Your journey to contract is inspiring. It’s wonderful to have come to learn about your work by way of this wonderful competition. Best of luck to you in all of your writing endeavors! 🙂

Thanks so much! You and everyone else in the SYTYCW community has been so incredibly supportive and awesome, it’s insane! You guys are all amazing!

Congratulations, Lauren! Fantastic call story. Wishing you all the best with your debut.

Beautiful Call Story!
I was shaking and getting flustered for you, like it was my Call. Haha. Congrats, Lauren! I’ll keep an eye out for Evony x Galen’s story. 🙂