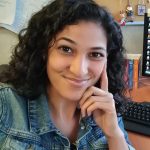 Like many people, I got swept up in the excitement of the Black Panther movie release last month. I love a good superhero flick (and Michael B. Jordan, obvs), so I eagerly anticipated visiting Wakanda. I didn’t go on opening weekend, which in Canada was February 16; I tend to avoid that kind of madness. But after it had been safely playing for a couple weeks, I bought a ticket and saw the show during a Sunday matinee. The movie didn’t disappoint.

This superhero film was different. There’s the obvious reason—that it puts an African and African American cast front and centre. It’s also quite political, both the storyline and the significance of its release in today’s political climate. But mostly the film stands apart because we don’t get the sense it’s about an epic battle between good and evil. Rather, Black Panther presents us with an exploration of those complex and deeply personal journeys toward morality and identity.

At every turn, we’re presented with characters that are richly layered, with their own goals, motivations and unique traits. Our hero, King T’Challa, is tasked with navigating the choice between keeping his people and resources safe from prying hands and the outside world (Wakanda is secretly one of the most technologically advanced countries on the planet), or answering a greater call to action and helping others at an unknown cost. We see him break from tradition, falling back on his experience as a politician to find a tactful solution to a very complicated problem.

The film’s villain, Killmonger (Erik Stevens), is one of its most intriguing characters. He’s not the clear-cut antagonist that panders to clichés but a more ambiguous antihero fighting for justice in his own way, which for him can only be delivered when the oppressor becomes the oppressed. It’s hard to get on board with Killmonger’s brand of justice but we do feel empathy for him and concern for his fate. We watch our villain deliver some heartbreaking lines even as we feel frustrated with our hero’s reluctance to help.

What’s important here is how the film reveals character motivation. Killmonger’s perspective is deeply shaped by his life experience, and Black Panther doesn’t hide this. This isn’t a story where secret desires and personal motivations are relegated to quiet scenes or hushed conversations; character motivation is at the forefront, shining a spotlight on the specific history and worldly circumstances that have molded its characters, informing their thoughts and actions.

This goes a long way in fleshing out a compelling secondary cast. We see strong and multi-layered characters in Okoye, the king’s fierce and trusted general, who is serious and stoic but also delivers some of the funniest one-liners in the movie. Nakia, T’Challa’s former lover, is a spy for the nation whose many missions in other countries have shaped her dissenting opinion on Wakanda’s keep-to-itself approach; she clashes with T’Challa despite her affection for him. Then there’s Shuri, the king’s feisty kid sister. A wonderful example of a STEM heroine who loves creating high-tech armour as much as donning it and kicking ass. We can understand why W’Kabi, T’Challa’s best friend, feels compelled to switch loyalties and fight for a new vision of Wakanda. And we’re given an unlikely ally in the Jabari leader M’Baku, who lords over a forgotten region of Wakanda, rarely visited by its king. He could abandon T’Challa yet fights for his restoration to the throne.

In Black Panther, when a line is drawn in the sand, there’s no easy telling who will be on which side and why. But the film does an excellent job of showing us that each character has a difficult choice to make; each has their own motivation, their own code, and their own set of consequences. Wakanda itself parallels these characters’ complexity, reinforcing that things are not as they appear. W’Kabi says at one point that the outside world looks at Wakanda and sees what it wants to see—a provincial African nation. But behind the country’s mountain ranges lies a lush and prosperous land of fierce warriors and boundless resources.

Creating multi-layered characters isn’t a new concept. Writers are always considering the building blocks of characterization, why stereotypes should be avoided and how to create well-developed, memorable characters. But if you haven’t seen the movie yet, I’d recommend a watch. A film about identity probably has a lot to offer about creating solid characters. And if nothing else, it’s a unique and refreshing reminder of good storytelling when its grounded in strong characterization.