Shannon Stacey first sold to Harlequin in 2010. Her Carina Press debut was Exclusively Yours and since then, she has written sixteen books. What she loves most about writing for Harlequin is the support and enthusiasm the Carina Press team has brought to every one of her titles. 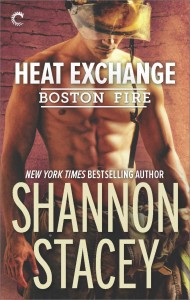 What book first got you hooked on Harlequin?
Honestly, I don’t even remember. I’m fairly sure they were Harlequin Presents, though, since the heroes were ridiculously wealthy and they often had international settings. I have vague memories of a cover starring a dark-haired man in a khaki shirt and a blonde woman with Farrah Fawcett hair sharing a passionate embrace in long grass. Possibly African grass.

How did you celebrate selling your first manuscript?
I think we ordered pizza that night. I’m not one for dressing up and going out on the town, especially since dressing up in my town might cause people to ask me whose funeral I’d been to. But not having to cook is always celebration enough for me.

Which of the many books you’ve written has stayed with you the most and why?
Probably Yours to Keep, the third book in the Kowalski series. Not only did it land me on the New York Times list, but taking a trope that can be hard to put a fresh spin on (fake engagement), and having it be the favorite of so many readers is personally gratifying. It was also an absolute joy to write and the heroine remains one of my favorites.

What’s top of your TBR pile?
My TBR pile has been out of control for so long, I can’t even answer that question. One book that I’ve been saving for when I have enough extra time to really lose myself in the story, though, is The Good Girl by Mary Kubica. It’s not my usual reading cup of tea, but I’ve heard it’s outstanding and I’m saving it as a treat for myself.

What’s harder – first or last lines?
For me, definitely the last lines. There’s a very fine line between clichéd/corny and the kind of emotional ending that leaves readers with that happy sigh. Trying to find that balance point requires a lot of tweaking and rewriting. The key to keeping the standard “I love you” scene fresh is making sure it’s unique to your characters, which is another reason Yours to Keep is a book that sticks with me as readers seem to find that ending particularly memorable.

How do you choose your characters’ names?
Quite often the names of the main characters just pop into my head and feel right. But when they don’t, and for secondary characters, I’ll often scan through online lists of popular baby names. And thanks to genealogy, I can search for surnames by region, which helps. I scan lists until something feels right.

How do you push through writer’s block?
In my case, being blocked almost always means one of two things. Either I’m pushing the story in a dead-end direction or, more frequently, I’m in the wrong character point of view. If I backtrack to where the enthusiasm left off, I can usually spot the problem. I think of writer’s block as my subconscious trying to tell me I’ve gone off the rails and I’ve learned to trust that part of the process.

What’s the best career advice you’ve ever had?
The best advice I was given was not to let too many people in during the writing process. It was advice I ignored in the beginning, so I learned the hard way. There’s a temptation to seek validation, whether through critique groups or beta readers or contest critiques, and if you’re not a confident writer, you can get caught up trying to make the story what other people think it should be and losing what makes it uniquely yours. That’s not to say critique groups or beta readers are bad. Many authors in various career phases depend on them. Just have the confidence to trust in your voice and your story and politely discard advice that doesn’t feel right. And don’t read your reviews.

Your preferred writing snack?
For years it was M&Ms. Recently I discovered a passion for string cheese, though it’s much more complicated to properly peel and eat string cheese while typing, so there are still M&Ms on hand at all times.

Who is your favourite fictional couple?
At the risk of being wholly unoriginal, I’m going to say Eve and Roarke from JD Robb’s In Death series. Maybe because I’ve been married twenty-plus years, I like seeing their relationship play out over time. We see not only their highs, but their lows. We see them love, but we also see them fight and disagree and hurt each other. There’s a depth to their relationship that I love (though there is, admittedly, a difference between a romance novel and a forty-book series).

If you could rewrite your life, what would you change?
I’m one of those people who might have many regrets, but I wouldn’t go back and rewrite anything because every choice I’ve made, mistake or otherwise, brought me to this point. And this point (successful career, wonderful husband and two amazing children) is a wonderful place to be.

What would your readers be surprised to know about you?
Apparently that I’m a brunette. Whenever I add a photo of myself to a social media platform that was previously without, or share a picture of myself after a long span of pictures of my dog and food, I invariably get at least one person (usually more) that says “I thought you were a blonde”. I simply choose to believe I look like Marilyn Monroe in everybody’s mind.

What is your most overused word?
Wait…just one? I’m guilty of the common ones: just, so, well, like, etcetera. I like to start dialogue with so, but that might be because it’s actually a part of my own speech pattern. As is actually.

If I wasn’t a romance author, I would have liked to be…
There was never anything else I wanted to be. I guess technically there was a horror author phase, but it was short-lived. I waited my share of tables and enjoyed a brief period as our town’s children’s librarian before my second son was born, but I only ever wanted to be a romance author.

When was the last time you said ‘I love you’?
Probably when I left the house on a coffee run earlier today. We say I love you a lot in our house, even if it’s only flashing each other the sign language equivalent as we walk through a room. I’m very blessed to be married to a man with no hang-ups about expressing his love to his children and he doesn’t even run to the gas station without telling our teenage sons he’ll be right back and he loves them. Love isn’t a word either of us throw around lightly, but when we love you, you know it.

What does love feel like?
The flu? True love over time runs the gamut, from euphoria to an aching pain that won’t go away to just the quiet, everyday knowledge you don’t want to live the rest of your life without that person in it. It’s joy and terror and breathless anticipation and worry and…everything.

What’s your guiltiest pleasure?
I don’t feel guilty about anything I enjoy, but the pleasure I tell the fewest people about would probably be my addiction to the entire Real Housewives franchise and the Kardashian family. Oh, and Mob Wives. I think the lifestyle portrayed is so alien to my own it’s almost like watching science fiction. Just with great shoes and the occasional face-slapping.

What’s your most romantic song?
My song moods change like the wind, but I’ve always thought the perfect romantic songs (meaning they actually ARE romance novels in song form) are “She Didn’t Have Time” by Terri Clark and “We Danced” by Brad Paisley, with “Austin” by Blake Shelton as honourable mention.

Every hero needs a…
After deleting several inappropriate (if amusing) answers, I’ll go with a sense of honor. He doesn’t have to be perfect (and would be boring if he was) and will make mistakes, but if he has a strong sense of honour, he’s making them for what he believes to be the right reasons, which means we can believe in his redemption for the happily-ever-after.

Great Love Inspired Author Search: What We’re Looking for in a Story