R.L. Naquin first sold to Harlequin in 2011. Her Monster Haven Stories debut was Monster in My Closet and, since then, she has written six books. What she loves most about writing for Harlequin is the team of fantastic people who are dedicated to releasing the best books possible.

Don’t miss Phoenix in My Fortune, the latest book in A Monster Haven Story – out now!

1. What book first got you hooked on 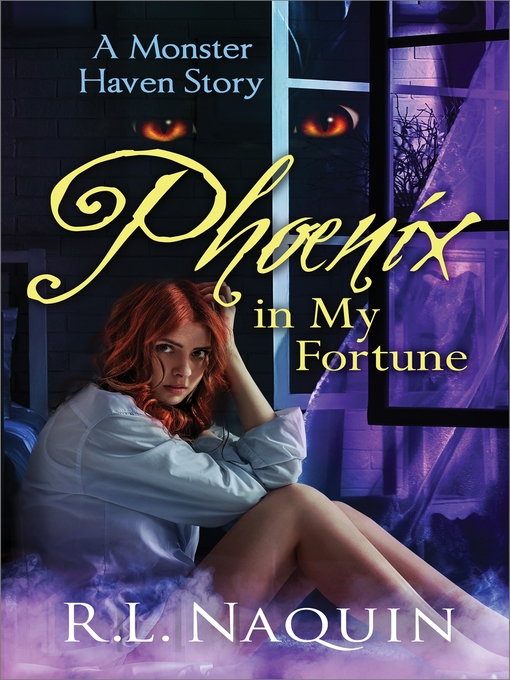 Harlequin?
I honestly couldn’t tell you. When I was about eighteen (so, a very long time ago), some relative or other found out I liked to read. Next thing I knew, several boxes of Harlequin books were being loaded into the back of my car while I stood there and watched. Once I started reading the books, I couldn’t stop until I got to the bottom of the last box. That whole summer is a blur.

2. How did you celebrate selling your first manuscript?
I cried a lot. I mean, a lot. Every time I thought I had a grip on things, I’d lose it again. Then we went out to dinner, during which I think I held it together, but I’m not positive.

3. Which of the many books you’ve written has stayed with you the most and why?
Book three, Fairies in My Fireplace, probably stuck with me the most. I had to do some very difficult things in that book. Writing it was not easy, but it was worth it.

4. What’s top of your TBR pile?
I just started Julie Moffet’s most recent Lexi Carmichael mystery, No Test for the Wicked. I love that series.

5. What book do you wish you’d written and why?
Beauty: A Retelling of Beauty and the Beast by Robin McKinley. Beauty and the Beast is my favourite fairy tale, and I know someday I’ll end up writing my own treatment of it. But that particular version is so perfect, I doubt I’ll ever be satisfied with anything I do with it.

6. What’s harder – first or last lines?
First lines are probably more difficult because there’s so much pressure placed on them, as if they had magical powers with the potential to make or break an entire career. Readers are a lot more forgiving than that.  Still, I can’t start writing a book until I know those first words.

7. How do you choose your characters names?
If a character’s name doesn’t pop into my head right away, I look on baby-name websites to find the right fit. Most of my characters are monsters or other bizarre supernatural creatures, so I tend to give them mundane names to offset their weirdness: Maurice the closet monster, Phil the gargoyle, Bruce the pigmy dragon. There’s a lot of humour in my urban fantasy series, so the normal names keep things grounded. If, for example, I’d named my gargoyle Beauregard Magnifico Rockhopper, I’d never be able to shape him as a breathing, feeling person in the minds of my readers. He’d be a throwaway character, only around for comic relief. Since his name is Phil, he feels more like a real person, despite being made of stone and speaking in riddles.

8. How do you push through writer’s block?
I go for long drives during which I speak out loud, gesture wildly, and otherwise make other drivers nervous. Writer’s block usually means I made a misstep somewhere, and my mind refuses to move the story forward until I go back and fix what I did wrong.

9. What’s the best career advice you’ve ever had?
Write the next book. All the marketing and gimmicks in the world won’t make you a better writer, and they won’t keep your readers happy. The only thing that will do both those things is to keep writing more books.

10. Your preferred writing snack?
Popcorn, dripping with butter. I swear, I don’t get any on my keyboard. Honest.

11. Who is your favourite fictional couple?
Nick and Nora Charles from the Thin Man (and its sequels).

12. If you could rewrite your life, what would you change?
I’d rewrite myself thin. Other than that, I wouldn’t rewrite a thing. The me I am today is a result of all the stupid mistakes and all the crappy circumstances the me of yesterday lived through.

13. What would your readers be surprised to know about you?
I’m not nearly as funny in person.

14. What is your most overused word?
It changes with each book. Apparently, my latest book contained way too many instances of the word “stink-eye.”

15. If I wasn’t a romance author, I would have liked to be…
Well, actually, I’m an urban fantasy author. But if I were something else, I can see myself living for months in a tree studying some little-known bird or primate, hoping I don’t smell too much like popcorn to keep from being noticed by the bald-faced pomegranate bird on the next branch.

16. When was the last time you said ‘I love you’?
About five minutes ago before my husband left the room.

17. What does love feel like?
Love feels like a shot of Irish cream in a cup of coffee—kind of tingly at first, followed by a warmth that spreads through the whole body and makes a person feel content and safe, even though a dinosaur is giving you the stink-eye through the window and aliens just set the roof on fire while making crème brulee.

18. What’s your guiltiest pleasure?
Reading the Disney Food Blog twice a day and trying to memorize the menus at all the restaurants on Disneyland and Walt Disney World property. Seriously.

19. What’s your most romantic song?
Haven’t Met You Yet by Michael Bublè

20. Every hero needs a…
purpose. Otherwise, what’s the point?

Hope you all enjoyed these insights into the wonderful world of R.L. Naquin! Don’t forget to check out our weekend writing tip tomorrow.