Marguerite Kaye  first sold to Harlequin in 2009. Her Harlequin Historical debut was The Wicked Lord Rasenby and since then, she has written fifteen full-length books and twenty-two novellas and online reads.  What she loves most about writing for Harlequin is the help and support of an amazing community of editorial staff and fellow authors. Buy her newest title, The Soldier’s Rebel Lover, here! 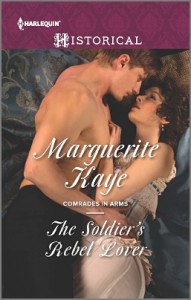 1. What book first got you hooked on Harlequin?
I can’t remember the exact title, but it was by the legendary Lynne Graham, and the heroine was an artist. As, co-incidentally, is Celeste, the heroine of my March 2015 release, The Soldiers Dark Secret.

2. How did you celebrate selling your first manuscript?
I was staying at my sister’s when I got ‘the call’, acting as emergency stand-in nanny to my two nieces for a few weeks. After lots of shrieking (me and Sis, not the nieces), we celebrated in the time-honoured fashion. We had lunch with pink champagne, and my best friend bought all of us pink fluffy tiaras and wands to wear—including him!

3. Which of the many books you’ve written has stayed with you the most and why?
My World War One anthology, Never Forget Me. Not only is it a subject matter close to my heart, with the centenary of the outbreak of war in 2014, it was a very topical subject. Striking a balance between a believable romance and the reality and tragedy of war was a real challenge. I also wanted to show how the reaction to the war changed over the four years of its duration, from patriotic fervour, to despair, and back to hope and a determination to get something positive out of the suffering, and that’s why one story eventually became three.

4. What’s top of your TBR pile?
A book that a friend gave me, The Lore of Scotland: A Guide to Scottish Legends. My nonfiction research tends to be eclectic, and I’ve discovered that inspiration crops up in the most unlikely of places. I’ve used family lore, tales of mermaids and selkies and witches in stories before, so I’m hoping that this book will get my creative juices flowing!

5. What book do you wish you’d written and why?
Not a book, but the screenplay of the Nordic Noir series The Bridge. It takes two very different and quirky characters, puts them in a situation where they’re not only forced to work together but forced into a life-changing relationship at a time of extreme crisis. Not only is it a brilliant thriller, I love the way this series (actually both series) twists norms and turns your expectations on their head, and at the same time manages to make you incredibly empathetic and invested in two people whose behaviour and morality are often questionable.

6. What’s harder – first or last lines?
Definitely first lines. Talking about her latest book One Plus One, the writer Jojo Moyes (I’m a huge fan) said that digital publishing had radically changed the way she opens a story. Because readers can sample first chapters, it’s vital to hook them right from the very start, to get an opening that instantly makes them want to know more, and to keep them turning the pages. In a series romance, that means you have to either make the reader fascinated by the hero, or empathise with the heroine or—preferably—both, in the very first few pages.

7. How do you choose your characters’ names?
I put a lot of effort into this. For me, the first name has to do two things: it has to ‘fit’ my vision of the character; and it has to be contemporary to the setting and period. Then there are some names that are simply never going to work for a hero—with apologies to any Kenneths out there, that name just evokes cardigans for me. For surnames and titles, I tend to use a lot of local place names, so if you looked up a map of my home county, you’d spot loads of my characters’ names. As to secondary characters—I tend to have fun with those. I don’t use all of a real person’s name, but I mix and match, depending on whether they’re a goody or a baddy. I ‘borrow’ first names of relatives too, for a bit of fun: I named a set of sea lochs after my three sisters once, a witch after one of my aunts, and a fey wife after another cousin—and they were all of them delighted, especially my aunt.

8. How do you push through writer’s block?
I am never stuck for ideas, but I often get stuck at about the 10K word count. My most successful tactic is to go what I call a ‘thinking walk.’ I live by the sea, and I have always found walking by the water’s edge clears my head. Sometimes though, I get a gut feel there’s something wrong but I’ve no idea what it is. When walking or a medicinal martini fail, then I’ll call my editor, and either talk through the problem or send her off a partial. She ALWAYS knows what’s wrong!

9. What’s the best career advice you’ve ever had
Not given directly to me, but something the writer Hilary Mantel has said on several occasions. Write a book you would want to read—if you wouldn’t want to read it, why would anyone else.

10. Your preferred writing snack?
I don’t snack when I’m writing. I ration (with great difficulty) my coffee intake to one in the morning, and then I pretty much stick to water and fruit, otherwise I feel mentally sluggish.

11. Who is your favourite fictional couple?
Deborah and Max from Georgette Heyer’s Faro’s Daughter

12. If you could rewrite your life, what would you change?
‘If only’ is one of those phrases that I detest. There are lots and lots of things I would do differently with the experience of hindsight, but then I wouldn’t be who I am, good bits and bad. So I try really hard to concentrate on living my life moving forward, and not looking back.

13. What would your readers be surprised to know about you?
I used to be a punk rocker.

14. What is your most overused word?
Realized. I just realized that.

15. If I wasn’t a romance author, I would have liked to be…
A clothes designer, a ballet dancer, a personal chef, but most of all, any other kind of writer

16. When was the last time you said ‘I love you’?
A few minutes ago

17. What does love feel like?
Freefall flying, like you really might burst with happiness, scary, exposed—like you have nowhere to hide, irrational, utterly confident, completely terrifying, completely amazing

19. What’s your most romantic song?
Elbow’s “Starlings” and the Cure’s “Just like Heaven”

20. Every hero needs a…
Heroine who is more than a match for him. 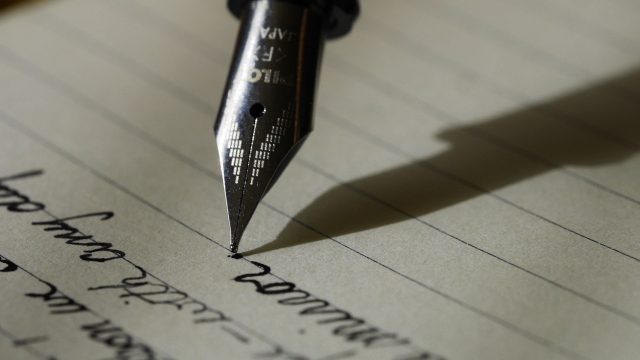 4 replies on “Interview with… Marguerite Kaye”

Oh I love Deborah and Max as well.
Even though I count you as a friend, I love finding out all these little tidbits about you. (I can definitely see you as a ballet dancer)
Not only are you a friend and an inspiration, without your encouragement, I wouldn’t be a Carina writer.
Looking forward to reading many more of your books.

Thank you, especially for the ballet dancer bit (not really, the inspiration bit is the best, but I don’t like to cry in public)! Actually ditto on the inspiration – your enthusiasm and work ethic are the kicking I need on bad days. And lowering the tone a wee bit, let’s face it, there is nothing better than gossip and a cocktail, and we both do that VERY well

Never forget me is my favourite – and not just because one of the heroines has my name! But come on, Marguerite – the next challenge has to be to write a book with a hero called Keith.

I’m so glad I did your name proud. As to Keith – that is a serious challenge indeed. My next sheikh is a geek, but obviously you can’t have a geek sheikh called Keith (I’m beginning to sound like I’m writing this for National Poetry Day). Could I have a hero whose SECOND name was Keith, or is that cheating – because the last hero in my current hero is Christopher, and Christopher Keith Armstrong sounds okay. Sort of. Maybe not. I give in!