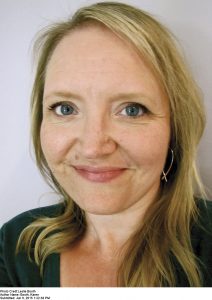 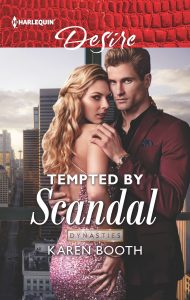 Karen is a veteran Desire author, with 12 Desires out and counting, and writes for other publishers as well. She sat down with her fellow Dynasties: SOTAL author Cat Schield to talk about how she got her start, her biggest writing challenges and what it’s like to work with other authors on a series.

Cat Schield: At what stage in your life did you become serious about pursuing a career as an author?

Karen Booth: I didn’t start writing fiction until after my 40th birthday. My kids were still young, but they were in school during the day. I worked from home as a seamstress, so I had slivers of spare time between jobs. I was doing some syndicated column writing at the time. Mostly DIY home-decorating pieces for a big newspaper. (Fun fact: I even shopped a non-fiction book on home dec sewing!) Right after I turned 40, I decided to try writing a novel. It’s funny because it wasn’t like I was determined to write a whole book. I was only resolved to attempt it. I truly thought I would get stuck and wouldn’t be able to finish. In fact, I didn’t tell a soul I was doing it. Not even my husband. But I was hooked after the first twenty pages. Then I had to come clean.

Cat: A lot of people talk about writing a book, but find it’s too big an undertaking. How long did it take you to finish your first one?

Karen: It took about six months, which I realize is not very long with your first book. I was pretty obsessed, not sleeping much, and stealing every spare minute I could to write.

Cat: Was there anything that held you back from pursuing your dream of being an author?

Karen: Fear of rejection, mostly. It’s really tough starting out. The first 100+ rejections were so demoralizing. I doubted myself so much, especially on the days when I would get multiple rejections. Was I doing the right thing? Did I suck? Should I quit? Every writer goes through this. Sure, there are people who get a big contract after only a handful of rejections, but they’re like supermodels and Powerball winners—they exist, but I’ve never met one. The rejection never goes away in this industry, but you learn to move on quicker. And of course, once you get that first yes, at least you know that somebody likes what you’re doing.

Cat: There are a lot of people who love what you do! Do you have a favorite couple or do you fall in love with each new story?

Karen: I know I’m not supposed to have favorites, but there are certainly characters who stick with me more than others. And then there are some couples that just have magic from the first word. I do my best to create that with every book.

Cat: What do you find most challenging about being an author?

Karen: The same thing I find challenging in life—balance! There are so many hats an author has to wear right now. Publicist, web master, social media maven. It never ends. That’s in addition to actually writing the books. It can be a lot to juggle. I try to chip away at everything every day. That works best for me. I’ve learned to zero in on my most productive times of day and save that time for writing. New words are the most important part. For me, it’s the morning. I try to get the day’s writing done before noon if possible. If I’m on deadline, that goes out the window, though. In that instance, I’m writing all day.

Cat: I’m terrible about balance. I’m either caught up in writing or marketing. I can’t seem to do both equally. And then there’s things like housework…

Karen: I totally get that. If I get sucked into one task, it’s hard for me to break away and work on something else. And housework? I only resort to that if I have a full-on case of writer’s block.

Cat: What are some of the challenges of being a prolific author?

Karen: The challenge of being prolific (or trying to be prolific—lots of romance authors write far more books than I do) is keeping multiple projects going at one time, all of which are at different stages. You have to be able to quickly make the mental shift from brainstorming to plotting to drafting to revising to editing.

Cat: Not to mention keeping all the characters straight. In addition to your own series, you’ve written in continuities like Dynasties: Secrets of the A-List. How does the process work? What are some of the challenges?

Karen: Several months before a manuscript is due, the authors receive what is called a continuity “bible.” It describes the characters and basic storylines, and it addresses continuity elements—the pieces of the story that will carry from one author’s book to the next. It’s up to the individual authors to flesh out their stories and make it work. That can include anything from molding a character’s backstory to making the plot more compelling or even adding additional characters. The most important part is collaborating with the editorial team and the other authors, especially the authors with books right before and after yours. You can’t make a big change without communicating it to them. You never know what kind of domino effect it will create. Cat, you and I have worked together closely on several continuities and I feel like we’ve really been able to make each other’s stories stronger. A lot of that just involved getting on the phone and brainstorming. Plus the occasional gripe session!

Cat: I always like working with you on continuities. We’ve been lucky to have several connected characters. What has been your favorite series?

Karen: I love working with you, too. I think we did some great work with Secrets of the A-List, taking the characters and the story in directions no one saw coming. Including us! I really loved working on Texas Cattleman’s Club: The Impostor, as well. We made our heroines best friends, which was super fun.

Karen: I think it’s good for me as a writer to tackle a character I might not come up with on my own. It pushes me outside my comfort zone, and that helps me grow as a writer. The important part is creating a connection between yourself and the characters. What about them is sympathetic? Lovable? Charming? Interesting? If it’s the hero or heroine, would you want to spend time with this person? If not, how can you change that?

Cat: For me it’s a nice change of pace to be given a story line. Sometimes I’m immediately drawn to the characters. Sometimes they don’t make sense. How do you deal with characters or storylines that don’t necessarily speak to you initially?

Karen: It always takes me time to warm up to characters and story lines that I didn’t create myself. I think a lot of writers feel that way. Dialogue is usually the start for making a story my own. It’s the part that comes most naturally to me, and once I’ve been able to carve out at least a chunk of the conversation in a particular scene or between two characters, it starts to come to life in my head. Once I can “see” it, I can write it.

Cat: Earlier you mentioned that you didn’t start writing until you were 40. Writing a book is one thing, but producing one that is good enough to be published takes both talent and toil. What do you do to perfect your craft?

Karen: I read a fair number of craft books, although I feel like the ones that are about creativity and inspiration are the most helpful. If I’m inspired, I can crank out decent stuff and do it pretty quickly. Otherwise, it really just comes down to writing a lot, putting in the time and really listening when it comes to feedback from either beta readers or my editor. With my Harlequin books, I don’t always have time to run everything by betas, but I take everything my editor says to heart. I think you have to continue to want to get better.

Cat: What advice would you give to an aspiring author?

Karen: It sounds like a cliché, but if you want it, you can’t quit. As difficult as it is to keep trying and to get knocked down over and over again, it’s a rite of passage. Nothing about writing is easy, but it’s incredibly rewarding when you’ve pulled an amazing string of words out of your own head. I think the most important thing is to focus on the work. Focus on the writing. It’s the one thing you can control and it’s the most important part of the job. Keep writing, keep reading, and don’t quit!

Be sure to leave your comments below! And if you want to get your feet wet with the Dynasties: Secrets of the A-List series, check out Karen’s book, as well as Joss Wood’s online story, “A One Night Affair,” at Harlequin.com. 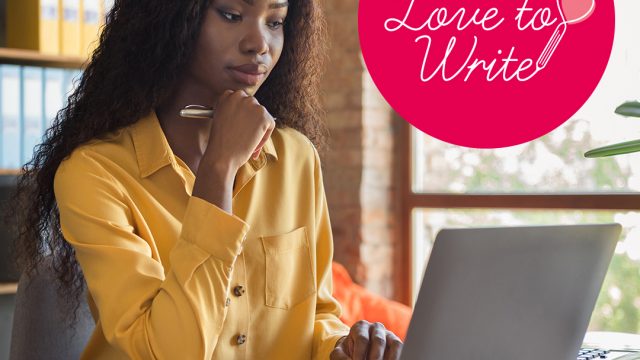 Great interview! Thanks for sharing ladies. It’s always good to know others experience the frustration of becoming a full-time published author with Harlequin. 🙂

I think frustration will always be part of the equation. That’s what makes the reward so sweet! Thanks for stopping by, Chrissie!

So fun to see this today! Congrats on the new release, Karen, and it was fun hearing about your journey to that first book :-).

Thanks, for the fab interview, ladies.
Only this week I likened the writing/submission process to the board game, snakes and ladders! Definitely frustrating when you slide back to the start, but as you say, well worth the rewards when you climb each ladder closer and closer to your goal! xxxm

It’s so much like snakes and ladders/chute and ladders! You make progress and you get your hopes up, and then you get knocked back and discouraged. That’s why I try to focus on the actual work of writing since that is a step forward I can take without anyone’s stamp of approval.