This week we welcome debut Harlequin Heartwarming author Kim Findlay, with her story on Getting the Call! 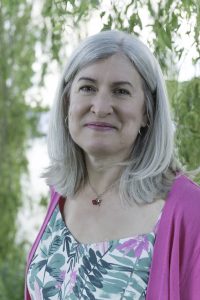 I was sitting at my desk, doing my regular job, when I got an email from Victoria Curran asking for my phone number.  I’d submitted a revised manuscript from the Harlequin Heartwarming Submission Blitz about two months previously, so I was pretty sure it was good news.  And it was!  Would I do another revision under contract?  Three guesses how I answered!

That’s the bare bones of my call story.  But fleshing it out involves So You Think You Can Write in a big way.

A Facebook friend, Maggie K. Black, writes for Love Inspired Suspense.  Little knowing my secret envy of her writing career, she posted about a writing contest for Harlequin.  Like almost everyone reading this blog, I’d written stories in my head, and dreamed of being a published writer.  So I perked up my metaphorical ears and hunted down this writing contest.

“I was encouraged and became an avid follower of So You Think You Can Write.”

So You Think You Can Write was co-hosted with Wattpad that year, and my first chapter was one of the 51 finalists, but I didn’t make the Top Ten for the final selection.  I was encouraged and became an avid follower of So You Think You Can Write.  When Harlequin Heartwarming had a submission blitz, off my Wattpad story went, and since I had a bit of time, another one about a hockey player.

To get through the suspense of waiting for a response, I joined the Harlequin Community.  There I found a very supportive, helpful group of writers and wannabes.  We parsed through every bit of news about who got rejected, who had a full manuscript requested, and who got a revision letter, looking for trends to help us while waiting on the blitz deadline.  At the end, my Wattpad story needed work, but Victoria Curran wanted to see the full manuscript of my hockey player story.

That of course was mostly incomplete, so I had to get to work.  I sent it off with high hopes.

“I learned a lot, especially about conflict.”

Meanwhile, I was still on the Harlequin Community boards, and participated in Camp Gonnabe, a writing camp for those who can’t get to the RWA conference.  I learned a lot, especially about conflict.  When Victoria responded that she liked my characters, and my voice, but that the story fell flat in the last third, I was able to apply what I’d learned and come up with a better conflict for my heroine.  When I finally completed that rewrite…it was the manuscript that triggered the call from Victoria.

A contact I’d made on the Harlequin Community boards,  Harlequin Heartwarming author Melinda Curtis, suggested that I send in the synopsis of my next best story.  If they liked it, I’d have a project to keep busy with after the first book was submitted.  There was a character in the first book who was a little cocky…what could happen to him to make him a worthy hero?  When I figured that out, I had my second book.  Victoria liked it, and I had a two book contract! 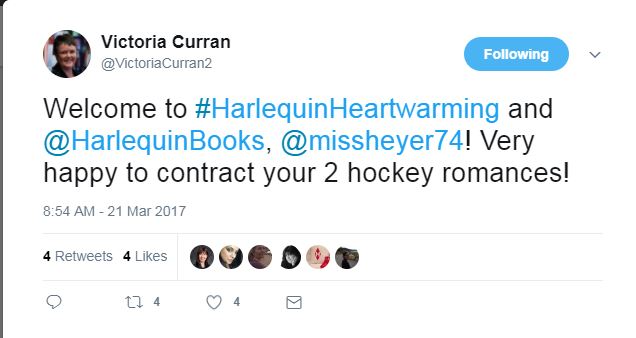 In March 2018 you can find out what happens with my hockey player.  He’s discovered the hard way that love and his hockey career don’t mix.  Then he meets a red-headed swim coach who may like his car better than she does him, and understands competition just as well as he does.  They make a great team when they finally get together, until his success in the playoffs starts to lead his career out of Toronto, while hers is keeping her in town.  Something has to give.

Until then, I’m putting my second hockey player through some trouble with his army widow and her two kids.

or on Facebook at her Kim Findlay Author page

and coming soon at kimfindlay.ca