Harlequin is very excited to welcome April Arrington to the Harlequin American Romance family. Read April’s thoughts on getting The Call!

I was elbow-deep in a toilet bowl, scrubbing away and fussing at my son for not cleaning his room. I was exhausted, aggravated and stuck in a rut. The kind of rut you hit when you pass thirty-five, get up the same time every morning and do the same thing every day. It’s that moment you realize being an adult isn’t quite as spectacular as you imagined it. 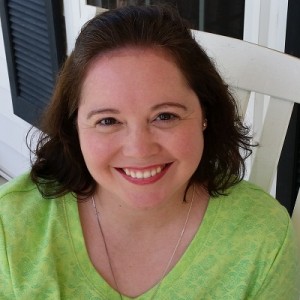 Not that my life was bad. In any way. As a matter of fact, I’m lucky. I’m a single mom with a full-time job in education, a fantastic kid and supportive family. But I couldn’t shake the feeling that something was missing. That somewhere along my path to pursuing happiness, I just kind of…lost my way.

I live in a small town where nothing major ever happens. It’s a beautiful, close-knit community but isolated from what seems like the rest of the world. Our financial reputation isn’t all that stellar, either. An analysis by the New York Times identified our county as the seventh hardest place to live in the U.S.

So, go figure. No wonder I was feeling down in the dumps.

After scrubbing that toilet, I went straight to my happy place. My writing spot. A cramped corner in the kitchen, cluttered with books, crumpled papers, highlighters and the like. The one place I felt at home every time I sat down. Because that’s where the magic always happened. I have friends who write to go to that same place. To a world where things work out like we wished they would. A world where things begin and end the fair way. Just as they should.

That’s when I saw the missed call on my cell. No name. Just an odd string of numbers I knew wasn’t from around here. I checked my voicemail and there was a message from Laura Barth.

Laura Barth. I knew her. Of course, I did! She’s the editor who gave me feedback on three chapters the summer before when I finally dug up the courage to dip my toe in the contest pond.

“The writing and story have a lot of potential.”

The writing and story have a lot of potential. That’s the first line she wrote. And the only one I needed to read at the time. It kept me writing. Kept me reading everything on the craft I could get my hands on. It led me to finish my first manuscript, Twins for the Bull Rider, submit it to the slush pile and, ultimately, sell it to Harlequin American Romance.

I know I sounded like an idiot when I called her back. I was sure she had the wrong April. The wrong number. The wrong manuscript. But she didn’t. Laura changed my life that day. She’ll never know how much. 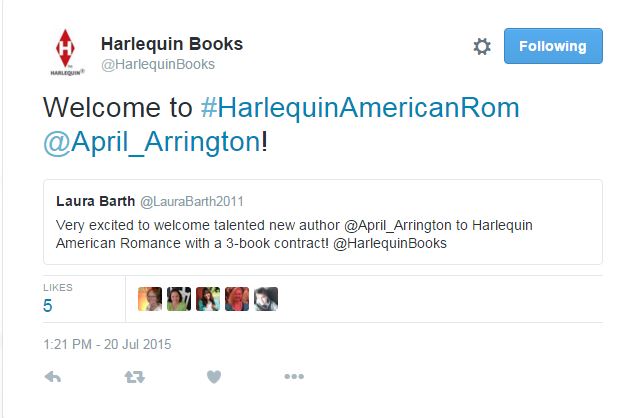 It wasn’t until I sat down to revisit my bull rider and his amazing lady that the tears came. It was like sharing the news with the best of friends. Better, even. Because no one will ever know you like your characters will. Cissy and Dominic were with me every day of that grueling first draft. Cissy fought poverty and fear to provide for her nephews and win the heart of her cowboy. And Dominic chose to sacrifice for love. The Call was their success, not mine. They led. I followed. Respect your characters and they’ll respect you. Love your characters and they’ll love you back. They have a story to tell. You just have to listen.

“The best moment of all, though, was with my son. I showed him the contract and told him he could do anything. Be anything he wanted. At any time in life. He just had to dream big and work hard.”

The best moment of all, though, was with my son. I showed him the contract and told him he could do anything. Be anything he wanted. At any time in life. He just had to dream big and work hard.

He smiled and looked at me differently. Has every day since. That’s been the biggest reward of all.

“There’s hope in words and new life in stories.”

To my fellow writers (the most supportive and kind group of people I’ve ever met):

There’s hope in words and new life in stories. Read them often. Write them hard. Give them everything you’ve got and never stop. You never know. The story you’re typing right now might end up being The One.

Twins for the Bull Rider, the first book in April’s Men of Raintree Ranch series, will be published with Harlequin American Romance in May 2016!

For more about April Arrington, visit her website at aprilarrington.net.

10 replies on “Getting the Call: Meet debut author April Arrington!”

This is so great, April! I hope this takes you everywhere you want to go. Save me a ticket for the movie premiere!! I know M (pseudonym) is proud!!

This is awesome, but not surprising since you are so witty, so smart, and so real! Couldn’t be more excited, and your comments are inspiring.

Thank you, Mrs. E!
I had some amazing teachers growing up. As a matter of fact, I had the honor of working with two of the best in our county as an adult. I remember a couple “coaches” who supported the entire student body as well as the staff. The two of you helped us all find our way & become stronger as a team.
Can’t thank you enough!

That sounds like an amazing moment. I choked up a little reading about that day because I’m sitting here, my pencil sharpened at both ends (because I’m clever like that) working away on a manuscript that started as a NaNoWriMo project. My first ever, and this story is determined to become a Love Inspired novel. I’ll keep working at it, and then one day, I’ll be where you are! So glad you made it!

Thank you, Margaret! I’m so glad to meet another writer that likes to go Old School, too. 🙂
I have three pens I love & when I get really stuck in a manuscript, I break them out. Something about working the words out through my hands on paper really brings my thoughts together.
I’m so glad you’re writing tonight! I actually just sat down after a Monday on the day job and needed a little oomph to get going. Thanks for inspiring me to stick to my goal tonight.
I love Love Inspired and I’m going to keep an eye out for your Love Inspired debut. And NaNoWriMo? Whew! Only brave souls battle their way out of NaNoWriMo so I have no doubts you’ll make it! 🙂
I wish you the best and can’t wait to see your call story here!

This is an incredible and uplifting story. You put the wind back in my sails after a rough couple of weeks. Way to go!! I can’t think of a more deserving person and I look forward to buying everyone of your books.

Thank you, Lexi!
It’s tough being a writer. There were a lot of days I had to push through & a lot of ones I had to take off once in a while. The good writing days make up for it. I wish you the best on your journey!

That is so awesome April! CONGRATS!

Thanks so much, Karen!
🙂