An interview with Amanda Cinelli 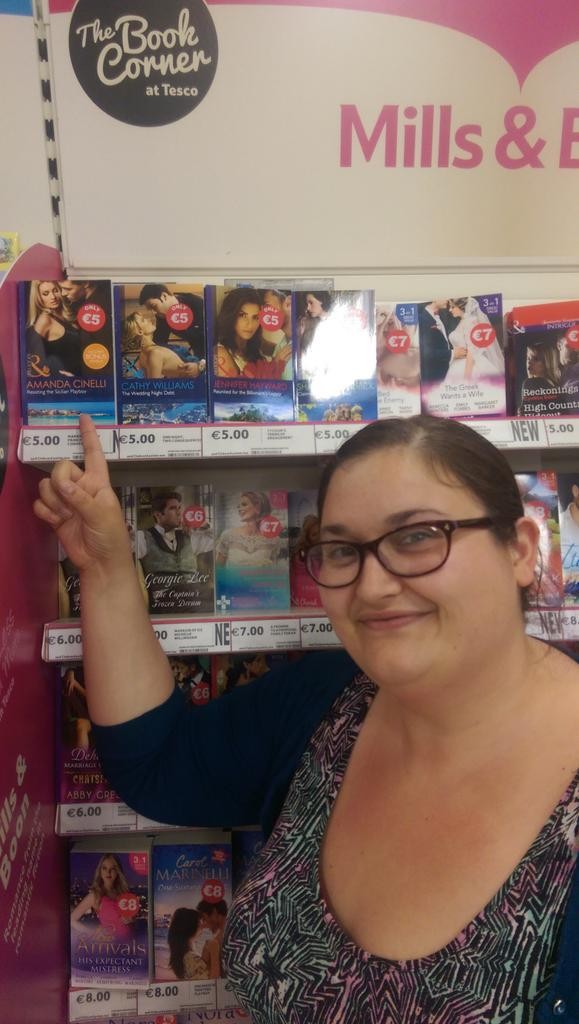 It was my absolute pleasure to make The Call to last year’s SYTYCW winner, the amazing Amanda Cinelli, and to be her editor now. Amanda’s entry stood out because it had such an eye-catching opening (heroine straddling a nightclub balcony – one way to get a meeting with the elusive hero!), she has a fantastic fresh writing style and captured the drama, emotion and passion intrinsic to Harlequin Presents. I cannot wait to uncover more exciting talent in this year’s competition!

Who could be better to encourage and inspire you to enter SYTYCW 2015 than someone who understands the nerves, excitement and anticipation – last year’s winner. I’ve asked Amanda some probing questions to get the insider’s perspective on what it’s like to be a part of SYTYCW:

CB: Amanda, how did you first come to hear about the contest?  And what gave you the push to throw caution to the wind and enter?

AC: I initially heard about the contest from the writing community on harlequin.com. I wasn’t going to enter as my manuscript was nowhere near being finished…but all of the buzz on the twitter hashtag convinced me that I couldn’t miss out on the opportunity!

CB: Was your winning entry your first manuscript? How long had you been working on it?

AC: It was my first manuscript, yes. I started it for the competition initially in the summer of 2012. I entered that year but didn’t make it through. About a week after Jennifer Hayward was named the winner, I received a lovely email from an editor in the London office asking to see my full manuscript. It wasn’t finished so I chickened out! Little did I know that I would enter in 2014 with the same story….and win!

CB: Had you ever submitted to Harlequin before?

AC: Apart from entering So You Think You Can Write 2012, I had never shown ANYONE my writing!
CB: What is it about the Presents series that you love so much and made you want to be a part of it?

AC: I started reading Presents when I was 12 and I completely fell in love with the faraway locations and alpha heroes. I just love being transported to these intensely passionate worlds where romance always wins. There’s something very therapeutic about Presents for me. And I can’t believe that I get to write them now!
CB: I know you have a soft spot for Joe Manganiello, who inspired your hero in Resisting the Sicilian Playboy, but where else did the inspiration for your story come from?

AC: The heroine in my story is a wedding planner and I actually came up with her occupation while I was planning my own wedding. I was at a wedding fair when I saw a stall with a huge sign: “Plan Your Dream Italian Wedding.” The final part of the puzzle instantly clicked and I knew this was what Dara Devlin was all about. I had already known that I was writing about a woman struggling with infertility. Dara came to me as a very ambitious character, someone who threw herself into her high-powered job to escape the feelings of loss that she struggled with every day. Planning dream weddings for people is a bittersweet exercise for her, but her organization and determination really define her as a character.

CB: What has the past year been like for you? What has your publishing journey been like? Aside from your wonderful editor of course 😉

AC: From the moment I was announced as the winner, I have felt so welcome in the Harlequin family. It’s an amazing feeling to have authors you have admired for such a long time send you messages of congratulations and offer their help.

It was very overwhelming in the beginning, it still is, but right at the start I really knew nothing about the publishing world. I had done no research on the business end of things. I had never even written a blog post! But my fellow authors and my wonderful editor were really patient with my constant needy emails and messages!

CB: What has been the most surprising thing about your publishing experience?

AC: Nobody in my family really knew that I was serious about writing before this competition. I was always kind of afraid to talk about this silly dream that I had because I never really thought It would happen. And now that it has, I realize how ridiculous it was to feel insecure about it! My parents brag about me to their friends, my husband talks through my plots with me, they’re all so supportive! My family have been amazing and they have cheered me on every step of the way.
CB: Was there ever a low point in your writing journey?  If so, what made you carry on?

AC: My book had some revisions due before it could be accepted, so I agreed on a pretty tight deadline in order to meet the special release date planned for Valentine’s Day. I think I had about three weeks to complete the revisions, and that was fine. But in the middle of week one…my daughter became very ill. She ended up being admitted to hospital for help with her breathing. I was terrified and so stressed I honestly don’t know how I completed those revisions at all! She was ill for about two weeks but I got loads of help from my husband and my parents. I think I perform quite well under pressure!

Things like this are bound to happen from time to time. Life happens! I think the important thing is that you don’t let it completely derail you. Deadlines are there to keep you on track but if the stress gets too much the editors are always there to help rework them. Carly has been so supportive over the past year, I don’t think I thank her enough. She’s an amazing editor!
CB: You’re mum to a busy toddler. How do you find time to write between the playing and the washing and the tantrums?!  Do you have a writing routine?

I am chaos personified right now! We have had two house moves in the past year and I reckon I’m the type of person who will still be unpacking boxes in five years’ time. I need a writing coach to stand over my shoulder and shout at me to get a steady routine in place!

My daughter is 20 months old. This might surprise you, but she doesn’t take well to mammy doing ANYTHING that doesn’t make her the centre of attention! I usually have to wait until she goes to bed to get anything done. My husband works 9 to 5 all week so it really kills me to have to go up to my office at 6 pm and miss out on a night of Netflix binge-watching together! I’m lucky enough to be able to rely on my parents for childcare so usually they can take her for a couple of hours twice a week so I don’t have to work late EVERY night.

AC: Oh there’s so much I’ve learned over the past year! But if I have to, I can boil it all down to this: Write The Damn Book.

It’s so easy to get distracted by research, mood boards, storyboards, social media presence, blogging, etc. But at the end of the day, that stuff won’t write the book for you!