Murder, Secrets, and Scandals in Harlequin Romantic Suspense
and
The Adair Affairs

In every Harlequin Romantic Suspense novel, the romance takes precedence over the suspense. We love those gritty characters who grapple with hard choices, all while losing themselves to love. As the hero and heroine deal with extraordinary circumstances—crime, natural disaster, drama, scandals—they should be on that unexpected romantic journey. Writers can take their characters all over the world.

Our stories are 70,000-75,000 words long and carry that edge-of-your-seat feel in moments of suspense. Thanks to a longer word-length, the stories contain deeper character development and layered plots. Intensity is key to this line. Whatever story you’re writing for us, it has to be unforgettable: unforgettable characters, an unforgettable premise, and most importantly, an unforgettable romance. We want readers to reach the end and not be able to get the story out of their heads.

The Harlequin Romantic Suspense team is delighted to present The Adair Affairs, a four-book miniseries that showcases the emotional thrill-ride we seek for our readers. In this series you’ll discover secret babies, family turmoil, nights of passion, friends turned lovers, and those lawmen who keep us safe. This series centers on the Adair family, whose legacy spans the country, from the hallowed halls of government in Washington, D.C. to a sprawling estate in California. 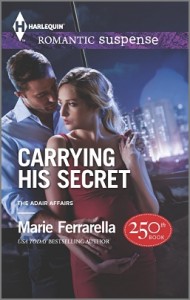 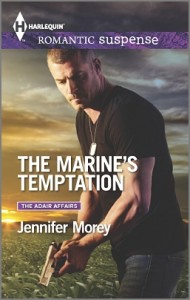 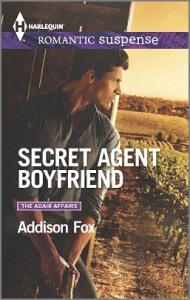 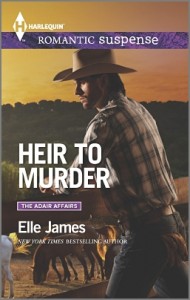 In these four books, a massive shock puts the Adair family into crisis mode—and everyone is a suspect. As lawmen search for a killer, other stories about the Adairs come to light, and one in particular unlocks an old secret.

Marie Ferrarella’s 250th book, Carrying His Secret, launches The Adair Affairs. In this gripping story, Elizabeth Shelton has always had a crush on Whit Adair, her boss’s son. But now, having just discovered she’s pregnant with Whit’s child after a one-night stand, she soon becomes the next target of her boss’s murderer….

In The Marine’s Temptation, by Jennifer Morey, Georgia Mason wanted adventure—and now she’s tumbled into a deadly game of cat and mouse between Marine Carson Adair and a murderer who has destroyed his family. Carson has to protect the spirited librarian as he uncovers secrets someone is killing to keep.

Indulge your fantasies of a Secret Agent Boyfriend, by Addison Fox. In this story, when long-buried secrets surface for an American royal family, society princess Landry Adair and too-handsome FBI expert Derek Winchester must pretend to care for each other to trap a killer. But fake romance turns very real while they work to solve a decades-old kidnapping.

New York Times bestselling author Elle James brings us the stunning conclusion with Heir to Murder. When his father is murdered, a newly found heir to a fortune and his far-too-attractive best friend hatch a plan to catch a killer…but will the painful secrets she’s keeping destroy the growing bond between them?

As you can tell, the Adairs have a lot to deal with. How could they possibly have time for romance? Oh, but they do. These four will capture your heart! And if you feel that these stories fit with what you’re writing, please submit your romance to our team. We are always looking for great new voices.