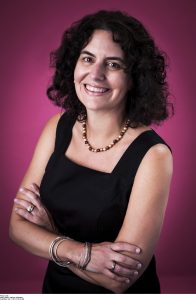 USA TODAY bestselling author Katherine Garbera wrote her first book for Desire in 1997. More than twenty years later, she talks about how her heroes have evolved up until this month’s Craving His Best Friend’s Ex.

In her own words…

My first book came out in 1997 and the world has definitely changed since then. But in terms of heroes, I’ve always liked alpha men—not jerks, but guys who aren’t afraid to go after what they want in all aspects of their lives. And even though I know it’s just as easy to fall in love with a poor man as a rich man I want my guy to be a go-getter and successful.

Usually for me my story spins out of my hero. I see him first and then I think: What heroine is going to give him the most trouble? What kind of woman is going to make this man crazy and force him to grow and change? Picking someone he doesn’t think he wants lays the groundwork for a lot of natural conflict—conflict that stems from who they are, not just “I love cats, you love dogs.”  It’s more concrete and adds a layer to the story that makes the plotting a lot easier.

My first published book, The Bachelor Next Door, is a perfect example of this. My hero, Rafe Santini, is a very successful construction company owner who moves in across the street from single mom Cass Gambrel and her eight-year-old son.  Now this set-up probably seems pretty white-bread to you, just a suburban romance between neighbors. But it’s more than that. I add in Rafe’s past: that he feels responsible for the death of his parents and younger sister. Since that tragedy, he has isolated from any personal connections, even cutting himself off from his large, extended Italian American family.  The last thing Rafe wants is to get involved with a woman who has a son.  The conflict is pretty simple.  Then Rafe and Cass are repeatedly thrown together until I force the black moment by having Cass and her son put in danger by something Rafe has done. He can’t risk losing this woman and child he’s started to love and leaves them for their own good.  I love a good angsty black moment. 🙂 Of course, they both decide that being together and in love is better than being “safe” and living apart.

WRITING TIP: The story is straightforward but from it I took the groundwork for most of my heroes. I’m a big believer in the rule of three…that’s where three things happen in a character’s life or in your plot that reinforce a belief. In The Bachelor Next Door, I used this rule with my hero.  The first time that Rafe feels like he’s better off a loner is when he feels guilty for the car crash that kills his close family (this involves not being able to provide physical security). Next, in his backstory I have him in a relationship that ends when his first construction company falls apart (financial security). The third instance of insecurity is the mini-black moment where the heroine’s eight-year-old is put at risk by the hero and he thinks walking away is the only way to keep them safe.

The next hero where I felt my writing change was Duke Merchon in Overnight Cinderella (2001).  He’s an executive in charge of security at a large company.  This time I wanted to play with the dichotomy of having a hero whose job it is to keep people safe but is himself dangerous and risky to be around.  Then I added in a woman he feels he can’t protect. He has to realize that security is an illusion and that when he falls in love with the heroine she gives him a strength that he didn’t have before.

WRITING TIP: This for me is a key in all of my books: how men and women have unique strengths. Let me say right now that I truly believe both men and women can do anything they put their minds to, but that men are better at some things and women at others. I think about my own life and who holds everything together when stuff is going completely bonkers. It’s always a woman—me, my mom, my sisters, etc.  The men in my life are very strong but when it comes to keeping everything going it’s the women who take the lead.  I admit that I came from a very matriarchal family so, this is my reality, and I bring this to the page when I write a book.  My heroes are strong men who can physically do anything, they are confident and arrogant, and it’s only the women in their lives that see the softer side.  It’s only with family that the heroes can let their guard down.

My early heroes have very little family. This was how I sharpened the conflict for them. They didn’t have the safety of their pack, making them lone wolves.  (I think I mentioned I love angsty heroes!) 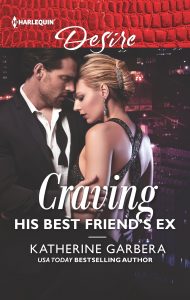 Ethan Caruthers, the hero in my latest release, Craving His Best Friend’s Ex, is a man with family. He’s a wealthy younger son, a successful lawyer. He has his family all around him.  Still I needed to isolate him (this is my own thing that I really like to do) so I gave him a past with addiction; until he got clean, he was the most destructive out of all his brothers. He also keeps his desires on a very tight leash because of this past destructiveness.  So when he first met the heroine, Crissanne Moss, years ago, he felt that flash of desire and need, and having no way to control it, decided to not go after her. His best friend on the other hand did, and they became a couple.  So now the only woman that Ethan has ever felt that kind of connection to is off limits.  There are other elements at play here but even when Crissanne shows up on Ethan’s doorstep—single—he can’t allow himself to feel that she could be his.  She makes him dangerous and he is now a responsible man who won’t allow that part of himself to have free reign.

I know there are a lot of ways to craft a story and that everyone has a different kind of hero that appeals to her as a reader and as a writer. But one thing we can all agree on is how important it is to get a hero right. When I’m plotting with my critique group I’m seriously all about the hero.  He’s why I read and write.

Good luck with your own writing!