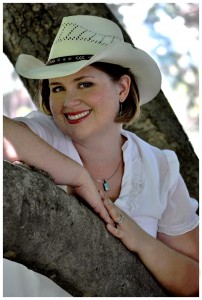 Sarah M. Anderson first sold to Harlequin in 2010. Her Desire debut was A Man of His Word and since then, she has written 12 books for Harlequin Desire and Superromance. What she loves most about writing for Harlequin is working with a fabulous editorial team.

1. What book first got you hooked on Harlequin?

I came to romance very late. I was a Very Serious English Major—in fact, I have my Master’s degree in the Victorian novel. So I came to romance through Jane Austen and the Bronte sisters, but I didn’t start reading romance until after my son was born ten years ago. Suddenly the evening news was more than I could take and I needed something happy, something fun instead of the same old forms of depressing. And romance was there! The first Harlequins I read were by Blythe Gifford. Even though I write contemporary cowboys, I still love a good historical (see the above Master’s degree). I also loved Christie Ridgway’s contemporaries!

2. How did you celebrate selling your first manu 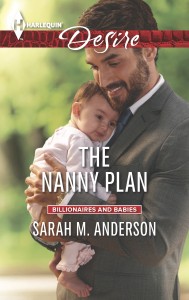 script?
I scared my son’s kindergarten teacher, a much older woman. She was the very first person I saw after I got The Call and I was so excited and she was so excited with me. We were jumping and hugging in the pick-up line. The children all thought we were hilarious! Then that night, after I’d calmed down and called everyone in the world, we went out to dinner!

3. Which of the many books you’ve written has stayed with you the most and why?
I love all my books equally but…I love some more than others. A Man of Privilege holds a special place in my heart because the revision process almost broke me, but it wound up winning the RT Desire of the Year for 2012 because I trusted my editor and put my heart into it! I’m also deeply fond of Rodeo Dreams, my first Superromance, because I’d actually written it a very long time ago—and my Desire editor, Stacy Boyd, was one of the first to reject it. But she liked it enough that when what would become my first Desire, A Man of His Word, crossed her desk, she remembered the rodeo book and gave me another chance. That was a very happy outcome! This year, my upcoming April book, The Nanny Plan, is my favourite because I based the meet-cute (woman with a charity and a large cardboard check corners a billionaire and gets him to donate) on a real-life incident. I just think it’s hilarious that it actually happened!

4. What’s top of your TBR pile?
I just finished a (surprise!) Blythe Gifford book, Secrets at Court. It was on the top of my pile for a year, but I finally got to it! I’ve got some travelling coming up, so I listen to audio books while I drive. I’ll be working through more of Lauren Willig’s Pink Carnation series.

5. What book do you wish you’d written and why?
Actually, when a book is that good, I don’t wish for it to change at all. Bad books, on the other had—especially those with a really good premise and really poor execution—those I wish I could take a crack at.

6. What’s harder – first or last lines?
Last lines because I have to find them. In general, for me, the last line is already in the book. The hero has said the last line at some point in the book. I just have to find it—which can be a challenge since the hero says quite a few things in the corse of 50,000 words. I’ll usually write something that’s not very good to hold the place and then I’ll read back through the book (looking to trim repetition or ‘just’) and I hope to find the last line when I’m doing it. It’s not usually verbatim. There has to be some twist on that line he’s already said that really seals the happily-ever-after. So hunting that line down takes time!

7. How do you choose your characters names?
I have a small booklet of baby names on my desk but often I’ll hear a name somewhere and decide I like that name. I am writing a Desire book right now (out Feb. 2016!) where the heroine’s original name was Ruby. Which I kept misspelling as Rudy—that’s usually the first sign I’ve chosen poorly. And then my water aerobics teacher was talking about one of her cats named Liberty Bell and I thought, LIBERTY. So Ruby/Rudy became Liberty and we were all much happier!

8. How do you push through writer’s block?
I heard Janet Evanovich once say, “There is no writer’s block. There are only lazy writers.” And boy, that’s harsh—but more true than we might like it to be. There are times when I’m legitimately stuck and it’s usually because either a) I’m trying to force the story or the characters to go somewhere they don’t want to or b) I’m not taking care of myself—especially not getting enough sleep. And when a) and b) happen at the same time? LOOK OUT! So I’ll take a very short break, no more than 3 days. I’ll read a book. I’ll watch a movie. I’ll get some sleep because oftentimes, I’ll wake up with an “Oh!” moment because my brain has sorted out the issue while I was sleeping. And if that still doesn’t work? I’ll just keep writing. You can’t fix a blank page. Even if it’s crap and I’m pretty sure I’m going to cut it, I’ll still write it. Give yourself permission to write crap because crap can be fixed. Blank pages cannot.

9. What’s the best career advice you’ve ever had?
I’ve had so much good advice from so many wonderful authors but I think the thing that has consistently been the best advice for day-in, day-out writing is, as Cherry Adair says, Write the damn book. Butt in chair, words on page is how other people phrase it. There’s so much to this business and there’s only so much we can control. There will always be more that we, as authors, can do. Blogging, social media, book videos, social media, websites, more social media—the list is endless. But at the end of the day, what really sells a book is the book. Write the book and set limits on everything else. Without the book, there’s nothing else.

10. Your preferred writing snack?
I try not to eat while I’m writing. I’ve found that a full stomach means I just want to nap. I write better hungry than I do full! So I’ll say tea is my favourite snack because I sure do drink a lot of it while I’m writing!

11. Who is your favorite fictional couple?
Wesley and Buttercup from The Princess Bride. Just because I didn’t read a lot of romance didn’t mean I didn’t watch it! They were the first fictional couple that I absolutely adored. I might have had a serious crush on Cary Elwes for a very long time…

12. If you could rewrite your life, what would you change?
In the grand scheme of things, nothing. Everything has led me to where I am right now. Even the really embarrassing stuff, like tripping and falling down 3 stairs in front of a line of students waiting to register. Who all applauded because yeah, I just looked like a goofus! But even stuff like that is all fodder for the writing. That said, I really do wish I’d taken a semester abroad in college. It never did seem to work out, but I wish I’d gotten to go!

13. What would your readers be surprised to know about you?
I’m actually very introverted. Any day I don’t have to leave my house is a good day. Which means my husband takes the brunt of my talking! I can be extroverted for booksignings and conferences but when it’s done, I don’t talk for a week!

14. What is your most overused word?
Oh, recently it was ‘just.’ ‘For a moment’ is another one I vastly overuse. I turned in a book that was long and was trying to cut words and had used ‘just’ almost six HUNDRED times!

15. If I wasn’t a romance author, I would have liked to be…
I would have continued on with what I was doing. I did some teaching and I worked for educational publishers. I only was able to stay home full time in the last two years to write. I’d still be in education, somehow! But as for the big What Ifs…I had dreams of being an actress in the theatre. I acted in high school, but I stopped in college. Recently, I was able to get the part I wanted in our local community theatre and I did a show. It was great to be back on stage again!

16. When was the last time you said “I love you”?
This morning, when I dropped my husband off at work and then again when my son left for school. We say it all the time!

17. What does love feel like?
Madness, really. You’re lightheaded and you can’t think of anything else but when you’re going to see him or her again. But it’s the very best kind of madness!

18. What’s your guiltiest pleasure?
I love bad movies, especially dumb action flicks. If Bruce Willis is shooting at someone, I’ll stop and watch it!

19. What’s your most romantic song?
My husband and I have a song, Sade’s “Lover’s Rock.” That’s our song. Which can be awkward when it comes on while we’re grocery shopping!

20. Every hero needs a…
Weakness. Even Superman had Kryptonite, right? A weakness is what makes heroes real and when the heroine is the one who helps them move past their weakness or accept it…that’s when the magic happens!

Hope you all enjoyed these insights into the wonderful world of Sarah M. Anderson, we sure did! Not to mention the cover for Sarah’s latest book – isn’t it adorable? Billionaires and Babies sounds perfect to us!