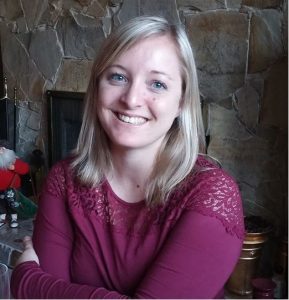 We’re so thrilled to introduce Laurel Greer to the Harlequin Special Edition Team! In her own words…

Having to sit down before you fall over—it’s a reaction we see on many a page, and I’d always classified it as melodramatic except for cases of death or extreme illness. But hearing the words “It’s Carly Silver with Harlequin…” start off a voicemail proved me wrong.

The day I got the call, I was more concerned about loading enough books on my Kindle for my long-weekend family vacation than about my own book that I’d submitted to Carly three months prior. Stacks of clothes and sunscreen teetered on my bed, and I was thoroughly thankful that Disney was entertaining my children (Flynn Rider: handsome and useful) because we were leaving for my family cabin in T-minus two hours. Trying to multitask, I was talking to my mom on the landline while counting out three days’ worth of Pull-Ups. A call came in on my cell—a New York number I didn’t recognize. I ignored it.

A minute later, when my cell chimed with a message, I said to my mom, “Maybe it’s Harlequin.”

“Maybe it is,” she replied, then threw out the obvious. “You should probably check the message.” (Winning her first of two “Mom’s always right” awards for the day.)

So I did. And it was Carly, wanting to buy SECOND TIME’S THE CHARM. It’s hard to describe the elation that rushes through you when you finally get what you’ve wanted for over a decade. And not just wanted, but worked really hard to achieve. Online courses, conferences, ignoring my husband so I could write after the kids were in bed, editing on my lunch hour, rejection after rejection after rejection—I’d checked all the boxes. I became a cliché as I sat down on the floor to make sure I didn’t fall over, picked up the phone, and… Called my mom. Who promptly said, “Uh, shouldn’t you be calling the editor back instead of me?” (Award number two.)

I wasn’t overly eloquent when I returned Carly’s call. My brain had stopped working, and I’m fairly sure my excitement didn’t come through. But she was kind and positive and by the time we hung up, I was the newest author of a one-book-plus-option deal with Harlequin Special Edition. (The option has since turned my singleton into a Sutter Creek, Montana trilogy—I rather enjoyed receiving that email, as well.) And it will forever remain a source of amusement to my writing wife (critique partner) and me that my next dial was to her rather than to my husband.

The thing about THE CALL is that the phone conversation itself isn’t the real story. The details, I imagine for most people, are in what comes before.

An avid romance reader since I was twelve (my grade eight and nine English teachers were highly amused by my Julie Garwood fan-fiction that I handed in for creative writing assignments), I started writing with intent in 2005 during the NHL strike. I figured if I couldn’t watch hot hockey players I could at least write about them. Hockey romance turned into ski-hill romance, and by 2008 I had four completed manuscripts (three of which will never again emerge from the ubiquitous box-under-the-bed). SECOND TIME’S THE CHARM was book number four. And, full disclosure, it got rejected by Harlequin American Romance in 2009. I tried to move on to a new project after that rejection, but I was pregnant and the words weren’t coming. I didn’t want to look to digital publishing at that point: I wanted my book on a Harlequin rack. I moved onto a different writing project and an even bigger life project—parenting. (Thank God pregnancy- and infant-rearing-related writer’s block was temporary—oof. It took training for a half-marathon to clear out my cobwebs and get back in my writer’s chair.)

In the fall of 2015, I was going through old work, reread SECOND TIME’S THE CHARM, and got a niggling feeling that with a polish, a better-written synopsis, and a better chapter one, I could resubmit and have a chance at publication. I took advantage of a Blue Pencil appointment at a writing conference to improve the first chapter (cutting the first three pages was likely the best advice I ever got from anyone), and eased into submission by tweeting a blurb for the December #PitMad event. I’d planned on submitting to Special Edition, but as I was focusing on my other work-in-progress, I wasn’t in a hurry.

Fast forward to March. The air conditioning blasted in my rental car as I waited for a bridge to lower on a causeway in Galveston, Texas. I was on vacation with my family and we were driving around, praying for the two-year-old to take a nap. My phone chirped. #PitMad had come around again, and a Special Edition editor had favorited my tweet from December. Three months later, she literally made my dreams come true. Working with Carly has been awesome—she has a way of saying “can you take the critical plot element you introduced in chapter fourteen and have it happen in chapter three instead?” that comes off as a fun problem to solve rather than feeling overwhelmed by having to rewrite a good chunk of a manuscript.

I’m thrilled to say I write for Harlequin Special Edition. It’s the first Harlequin line I fell in love with, and it’s still my favorite because of the themes of family and second chances that I inevitably weave into all my books. And when it comes to my journey from a twenty-five-year-old writing on the stained carpet of a tiny Vancouver apartment to now, twelve years later and holing up on my couch to get a few hours in after the kids go to bed every night, a number of adages that dominate the writing industry have proven themselves to be true.

One: sometimes it just needs to fall on the right desk. This story was rejected many a time. Yes, I’d improved my manuscript by the time I sold it, but in the end, Carly believed in my voice, even though she had a few major changes to my plot that she suggested, and that mattered. Two: don’t be afraid to put your work out there. #PitMad worked for me, and we’re fortunate to have more ways to get our work in front of an editor than existed a decade ago. Three: find good critique partners. I wouldn’t be published today were it not for the advice and support of a handful of awesome ladies who read my work and pour the whiskey. The words of one of my beta readers stuck with me for years (that the story was good enough to be published) and when I took another look at it, I saw she was right. So I tried again, and it finally worked. Next time I see her, the whiskey’s on me.

6 replies on “Getting the Call: Meet Laurel Greer!”

What a neat story and what hope it gives the rest of us struggling to become Harlequin authors. thanks for sharing. Can’t wait to read your book!

Thank you, Chrissie (and sorry it took me so long to reply). Best of luck with getting published!

What a great story! It’s so funny how life works, and I am so happy you got this book deal. You totally deserve it.

Thanks for everything you did to help me get here, Stacy!