I know I’m not alone in this one but I have to say I am completely in love with Chris Evans. Don’t tell him that, though, it would be awkward. But, I bet he would still be super nice about it!

Honestly, it all started a few years ago when I read an article in an in-flight magazine, I think on an American Airlines flight. But the whole thing was basically how even though he’s uber-famous Captain America now, he still hangs out with his childhood friends in Massachusetts and visits his mom all the time. I mean, who wouldn’t be into the beautiful superhero actor who still hangs out with his best friend from kindergarten? That just speaks to a very romance-hero-worthy level of loyalty along with a down-to-earth-ness I think we can all appreciate. Can’t you just picture him out in Boston with his friends, rockin’ a baseball hat (maybe a Patriots Super Bowl hat, unfortunate as that is) at the local establishment that lets him just go about his life because he’s not famous to them, he’s just one of the kids from the neighborhood? It’s such a great start to a meet-cute, ideally starring me as the other half.
I mean, not to say his looks don’t matter! Just look at him!

*sigh* The biceps! The shoulders! And I’ll…just stop there…
Now that brings me to one of my other favorite things about Chris: Captain America, a.k.a Steve Rogers! Anyone who has seen my desk can tell you, I’m a fan. Cap is great, with his aversion to bullies, willingness to punch Nazis, and deep loyalty to his best friend, Bucky Barnes, who [spoiler alert if you haven’t seen Winter Soldier!] would be so easy to leave behind what with that whole “assassin brainwashed by the Russians” thing. I could probably write a whole other Editor Crush article just about Steve Rogers. But Chris Evans brought this character to life so well. Could the old-fashioned, by-the-book Steve Rogers come off a little cheesy? Yes, especially when he has to stand next to genius, billionaire, playboy, philanthropist Tony Stark. But with Chris behind the wheel, so to speak, you end up with a character who, instead of being boring, comes across as a good guy. He’s always trying to do the right thing because he actually believes in it, not because if he doesn’t, bad things will happen. That’s quite refreshing in a world where you can’t turn around without stepping on one of the many dark, morally “complex” heroes. We need more good guys.

Now this gets a little political after the next photo, so just a heads up, it’s just my opinion and not endorsed by Harlequin or anything like that. 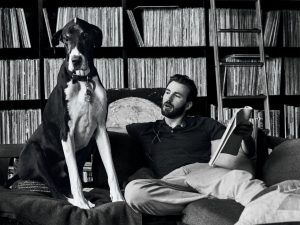 But Chris Evans totally pushed himself to the top of my celebrity crush list when he started taking on people like David Duke (a former KKK leader) on Twitter. It just the most Steve Rogers thing to do! Taking on bullies, making sure everyone knows they’re wrong and that we can all take a stand somehow. That’s basically the social media equivalent of Captain America’s original comic book debut: 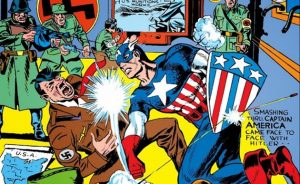 I like when celebrities use their platforms for good. Whether it’s raising money for medical research or advocating for a cause, people do pay attention to them and it’s nice to see them use that to make the world a better place.