We’re back with more brilliant advice to help you get the best out of your stories! This week we have a great post from SYTYCW 2014 on coincidences, contrivance & misunderstandings – enjoy! 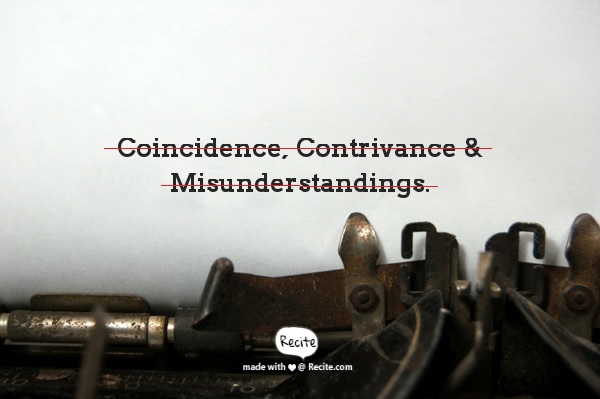 Avoiding the pitfalls of contrivance, coincidence and misunderstandings in a story usually comes down to the characters’ conflicts – how internal or external they are – and development. If the premise of a story is contrived, a reader may find it hard to believe in the characters and their journey. And relying on a coincidence or misunderstanding can be an easy fix to disguise what is missing in a character’s development. So how can it be avoided?

Contrivance
If the premise of the story seems too convenient or too forced, it may not be quite believable enough to the reader. And in this situation, what will keep them reading the story? Strengthening a character’s internal conflict could make it easier for the reader to understand the characters’ motivations and develop sympathy for the character so that they itch to turn the pages!

How to avoid sounding contrived? If the characters’ emotional conflicts are unconvincing, and what’s keeping them apart is unclear and a bit weak, the best step is usually to go back and explore their conflicts more. Think about what is really keeping them apart. Is it an external event – something neither of them can control? If so, the question arises that once this is resolved, what’s to stop them growing closer? The answer is usually, nothing. In which case there is often no tension and no deeper character development for the reader to enjoy.

So really think about the best way to bring the characters together that is believable and enjoyable. For example, when writing forced proximity between your characters, try to develop fresh new ideas for how they are flung together in a situation! Ask yourself what would you do in that situation? Then try absolutely every other option and if you reach a stage where there are no alternatives, then you have your believable set up!

It is usually the case that if a hero and heroine’s conflicts are external then their issues are more likely to be resolved with a simple conversation – rather than them actually overcoming their internal emotional barriers. And what is to keep them apart once they have that chat and address those external issues? If the conflict is based on a misunderstanding, there are no real obstacles for the characters to overcome and so nothing can keep them apart. This can create a very weak and unsatisfying ending for the reader.

To avoid leaving the reader dissatisfied by the hero and heroine’s easy resolution, dig deep and build the layers of their emotional conflicts – think about what in their internal conflict is actually keeping them apart and how are they going to overcome it?

How to avoid using a misunderstanding between characters? Plan the story carefully and ensure that the characters conflicts can’t just be resolved with a conversation. Really send them on a journey of discovery as they learn about themselves and overcome the emotional – not external – obstacles.

Coincidence
A coincidence is usually employed a when the conflict isn’t strong enough or developed enough to drive the story forward. This can be annoying for the reader and often leads to a very unsatisfying resolution. But, avoiding coincidences can help to strengthen a story.

For example, if a hero and heroine meet up again because they choose to rather than just running into each other, this can be much more powerful and have a bigger impact on the reader. Really dig deep to discover what is driving your characters. Focus on their internal conflicts rather than relying on a coincidence to bring them together or drive them apart. If they make these decisions themselves, rather than fate playing a part, the payoff can be more satisfying as the reader has seen the character development through the story.

How to avoid using a coincidence to drive the story? If a coincidence has been used, try going back and rethinking about how to achieve the ending through deeper character development and layering the emotional conflict.

1. Focus on creating a convincing set up.
2. Ensure it takes more than a conversation to overcome the obstacles.
3. Use internal conflict to drive the story, rather than a coincidence.

Have any of you had to deal with these common pitfalls in your writing? If so, how did you deal with it? And do you feel your story is stronger now?