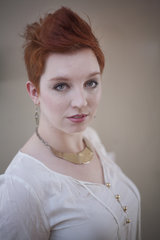 The Harlequin E (digital first) team has read some fantastic romances, but every so often a more unusual one comes our way! Emmie Mears’s debut title has a strong superheroine quality–fitting since that’s the theme of her website and something she firmly believes in. So see how super characters and the Scottish referendum did a little blending…

I was always making up stories as a kid. My first completed story was a comic strip about a dog that peed on a flower only to have the flower get mad at it. Later on, I was hungry to find books where girls were doing awesome things. There were no Hunger Games back in the 80s and 90s, and I finally decided that I’d have to write the books I wanted to read myself. In 8th grade, I had a teacher (aptly enough, her name was Mrs. Wright) who read a personal narrative essay I wrote and loved it. She told me I was a great writer then, and from then on I think I kept her words with me wherever I went.

Writing. A lot. I wrote two and a half novels before I wrote one that snagged my agent (and my first contract). Aside from that, though, I think it was learning to take critique of my work and use it to make my stories better. I was fortunate to get a very timely bit of bluntness from an author I know (who has since landed on the NYT bestseller list with her newest trilogy), and for whatever reason, that was the exact thing I needed to hear right when I needed to hear it. I took her words, some newly-scavenged knowledge from craft books, and my tendency for prolific word-flurries — and I wrote THE MASKED SONGBIRD.

If I could tell new writers anything, it would be to learn to use critiques to become better at your craft. Let it sting for a moment, sift through it for the truth, and let it hone you like the hammer and anvil hones a blade.

Structure, structure, structure. Screenwriters have structure injected into their bones from the moment they hit FADE IN. Novelists, on the other hand, seem to have that lesson omitted from the syllabus. Pluck just about any book from the shelf and you can see that it will hold up to basic aspects of structure. Inciting incidents, plot points, midpoint, climax. I don’t think of structure as a formula so much as a framework. You can build a house out of straw or mud or bricks, but it probably needs some sort of walls and a roof or it’s just a pile of materials.

The Writer’s Digest Conference in New York was a shock of reality for me. It introduced me to the business of writing, gave the Mystical Agent Beasts actual faces (they’re people, you know), and introduced me to many people I now consider friends. Book wise, Story Engineering by Larry Brooks became my best friend. Also, Donald Maass’s books Writing the Breakout Novel and Writing 21st Century Fiction were phenomenal for deepening how I looked at stories, characters, plots, and every aspect of my novels.

Harlequin’s a name I’d heard my whole life. In fact, up until I actively started paying attention, it very well may have been the only publisher I could have named if asked, even though growing up I don’t recall reading books from Harlequin. That’s how powerful it is as a brand, and as a debut author, I loved knowing that brand would be behind me. Not only is Harlequin a huge publisher, but I’ve had such a fantastic experience working with my editor Matrice and the folks at HarlequinE to make this book happen.

I may have panicked a little. I’m not sure I quite believed my agent at first; there was a lot of “What?” on my end of that phone call. Given the timeline of THE MASKED SONGBIRD, I wasn’t sure if we’d ever get it to readers. I went into querying and submission knowing that superheroes were a tough sell, a book set against a moment in time could be a hard sell, and that every week shaved away at the chances of it happening. Hearing that we had an offer was truly a unique moment. When it finally sunk in (it’s still sinking in) that I really will get to introduce Gwen to the world, my husband and I cracked a bottle of Prosecco and toasted to the last ten years I’ve spent working toward this exciting adventure.

What inspired THE MASKED SONGBIRD?

I’ve spent a large part of the last decade waiting to finally see a female superhero on the big screen. In spring of 2012, I was sitting in the theater to watch something, and a trailer for the rebooted Spiderman trilogy came on. Much as I love Spiderman, I found myself more and more annoyed as the trailer went on. Where was Storm? Where was Wonder Woman? Captain Marvel?

Pour that into a beaker and simmer it over eight years of watching Scottish devolution slowly turn into a scheduled referendum for independence. This book was the closest thing to a WHIZ BANG poof of smoke and inspiration I’ve ever had. Gwen Maule’s voice sounded in my head with the book’s opening sentences fully formed, and six weeks later, the book was done.

THE MASKED SONGBIRD will be published July 1, 2014 by HarlequinE.
To follow Emmie, or her “Searching for Superwomen” trail, check out the sites below!

We’re looking forward to some more fantastic stories from Emmie! Along with a sequel to The Masked Songbird, she’s developing a Harlequin POP! title about geek girls. We can’t wait!

Fabulous interview! Just goes to show what a great deal of perseverance and the right amount of talent can do. Congrats, Emmie!

Thank you so much!

Thank you so much for having me over on the SOLD! blog!

Excellent Emmie, this is one Scotsman that cant wait to read your book.

Cheers, David! I hope you love it!

Sounds fascinating! Are there other “superheroine” stories that you’d recommend? Can’t wait to read yours!

Hi to a fellow Austin native. We are rare, I’m told. 🙂

Loved this interview, Emmie, and double-love your website and blog. Like you, I also left a (good) job, that made me miserable, to piece together an income and write this past year, and, despite the sacrifices, I’ve never felt more alive. I hope you’re feeling something similar amidst the hard parts.

I’ll be rooting for you as you build your career, and can’t wait to read The Masked Songbird. Sounds awesome!

Hello! I’m not sure how qualified I am to be a native when I haven’t been back since I was 3 months old, but…:D

Thanks so much for stopping by my websites! I really appreciate hearing that you found something you could latch onto there — it’s always good to hear from someone who gets the similar experience. 🙂

Thanks again for commenting!

Wonderful interview Emmie! I am so excited to read your book! You set a goal and did what you had to do, and now it’s a reality! So proud of you! I can say, ‘I knew you when!’ Congratulations!

Thanks so much, Laura! 😀