Harlequin Romance/ Harlequin Medical Romance author Scarlet Wilson kicks off our new weekly My Ultimate Crush column, where your favourite authors explain who their number one crushes are, and why! Enjoy 🙂 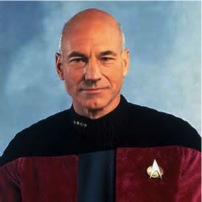 My favourite ever Star Trek Captain and there are lots of reasons why.

Patrick Stewart was apparently puzzled to be cast as the new Enterprise captain as he wondered if people would connect with a bald middle-aged Englishman. How little he knew!

Picard has one of the most interesting character developments of any TV series. He starts as prickly, ethical and a huge moral compass. Any Star Trek fan knows how often the Prime Directive is actually ignored!

I have several favourite episodes, the first where he is introduced to Q. The 3rd season finale called The Best of Both Worlds where Picard is assimilated by the Borg. The words, “I am Locutus of Borg, resistance is futile,” will always send a shiver down my spine.

The huge amount of character development when he comes back to his ship, tormented, having flashbacks, the guilt of his actions as a Borg are done so well. This backstory is the whole basis for the film First Contact, which reveals he still has traumatic memories and after effects of assimilation.

In the fourth season we learn of his prickly relationship with his brother Robert, who looks after the family vineyards in La Barre after Picard joined Starfleet. Picard has always been a bit of a loner and the poor relationship with his brother made us more sympathetic towards him. When it is revealed in the Star Trek film Generations that his brother and his nephew Rene have both died in a fire we finally see him devastated and weeping for his family. This film also reveals his jealousy of his brother having the wife and child that he never had.

And what about his love life? Well, Picard has numerous encounters with women from other planets, all of whom fall for his accent and good manners. In later films it was revealed Picard married Dr Beverly Crusher. But we’re not going to discuss that. Ever.

Captain Picard is my secret crush. I love his demeanour, his manner, his panache and his strong sense of ethics. How do I join Starfleet?

Make sure you check out Scarlet’s new Harlequin Romance, The Prince She Never Forgot, available now!