Hello, I’m here to speak with you about my editor crush. It was only secret for about the 114 minutes of secondhand embarrassment I endured while watching Green Lantern, but Ryan, honey, we’ve come so far.

I know, I know, shocking literally no one.

But just in case you need some convincing, let me expound upon some of his virtues. When a girl and her boyfriend split just two days after prom, she edited Ryan Reynolds into the pictures over her ex and he responded because he’s here for his fans on another level:

My boyfriend and I broke up a few days after prom, so I decided to “edit” the photos a little @VancityReynolds pic.twitter.com/Ecvn5Wkgb4

We should photoshop me over his yearbook picture next. #DontMessWithGabi https://t.co/o0qFBXvSNi

When Wonder Woman surpassed Deadpool at the box office at $638 million, Ryan Reynolds reminded us that there’s only one response:

The Merc may be filthier, but her B.O. is stronger. Congrats #WonderWoman. pic.twitter.com/jhP1hRAKlY

Just look at this spoof with Sandra Bullock and Betty White for The Proposal (rife with inappropriate language, fyi):

That self-deprecating charm. The inappropriate humor.

Okay, and he’s not hideous.

I also present, for your consideration, this timeline of Ryan Reynolds and his deep and abiding love of dogs.

Hey, I’m just getting started. I haven’t even started talking about his family yet. Blake Lively and Ryan Reynolds are my celebrity OTP, totally perfect and totally untouchable, unless I get famous and marry the CEO of Ben & Jerry’s.

Seriously, they’re so wonderful, and beautiful. It’s like looking directly into the sun.

And in case that didn’t totally blow out your retinas, they have two precious daughters who I believe will save the world with love and peace someday, like magical girls. 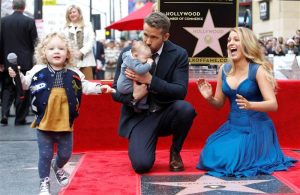 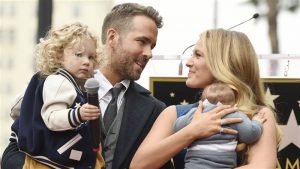 And he knows how lucky he is.  But rather than shove it in our faces, because Ryan Reynolds is actually very sweet and considerate, he does things like this instead:

Being a Dad isn't just about eating a huge bag of gummy-bears as your wife gives birth. It means being comfortable with the word hero.

Went to Disneyland because my daughter's obsessed with Mickey Mouse. She was so excited when I got home and told her.

Just want to wish Billy Ray Cyrus the most special, magical birthday ever. I love you with all my heart. Also, Happy Birthday to my wife.

Oh, Ryan Reynolds. He loves his children, loves his wife, and is literally a comic book…hero?