By Jenn Burke and Kelly Jensen, authors of PHASE SHIFT

With the Chaos Series all wrapped up, we thought we’d share a few things we’ve learned along the way.

All a first draft need do is exist. It shouldn’t be perfect, but simply a translation of thoughts to the page. Once it’s finished, read it with that in mind. Make notes as you write. Leaving those revisions to the next round will help you draft more quickly.

…but be prepared to sacrifice it for the greater good. No word written is ever wasted. Even if the most beautiful sentence you ever crafted never makes it into print, the act of writing it will make you a better writer.

Being objective about your words will really help during editing, too. Having your editor say that a subplot you love just isn’t working can be really hard to accept. But if you can look at it from a different angle and understand your editor wants to make your book stronger, it helps.

Take a step back, or sideways, when it’s time to proofread. Kelly prefers to read manuscripts on her Kindle to remove the temptation to edit as she goes. She’ll mark changes in notes to be entered into the manuscript file later. In comparison, Jenn uses the text-to-speech functionality of Microsoft Word to have the computer read the manuscript to her. Both methods are great at picking up more echoes, inconsistencies, repetitions and redundancies. (Also, hearing sex scenes or expletives read in a robotic voice never gets less funny.)

Write the Stories You Want to Read

If you don’t love it, neither will your reader. Readers want the stories that make authors laugh, cry and shift to the edge of their seat. The ones that make you feel good as you write them.

Don’t be afraid to put something of yourself into your characters or story—whether it’s a personal like or dislike, or otherwise drawn from real life. It helps to anchor the story.

Be Realistic About Your Expectations

If you’re writing in a subgenre of a subgenre, you need to be realistic about how many books you’re going to sell. You might write the book that breaks all the barriers—but probably not. Being realistic at the get-go will help you have a healthy outlook on your career’s progress.

Finally, nothing sells a book like writing another book. Keep writing, keep telling the stories you love, and when someone discovers you, they’ll be thrilled to also discover you have a backlist for them to buy. 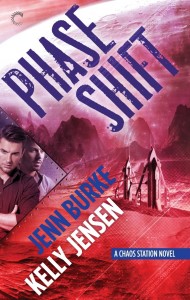 Zander and Felix’s relationship has always pushed boundaries—personal and professional alike—but their love and commitment is stronger than ever. So strong that Zander’s ready to ask commitment-shy Felix the question of a lifetime when he’s interrupted. The Chaos is being hacked, and crucial, top secret information about the project that created Zander—and his fellow super soldiers—has been leaked.

Neither man could have expected the enormity of what’s discovered at the end of the data trail: an entire colony of super soldiers run by the very doctor who changed Zander’s life forever. And now she needs them both—Zander to train her new crop of soldiers, and Felix’s new crystalline arm to stabilize their body chemistry.

With help from the unlikeliest of allies, Zander, Felix and the Chaos crew must destroy the project and all its ill-gotten information. But when the team is split up and Felix is MIA after a dangerous run, galactic disaster is a very real possibility…and Zander may have missed his chance to ask for forever.

Jenn and Kelly met in 2009 through a mutual infatuation with a man who wasn’t real. After all but crashing the video game’s forums with daily dissection of their obsession, they started writing together, discovered they really liked writing together and began plotting stories in worlds of their own creation.

The CHAOS STATION series aren’t the first books they’ve written together, and they’re pretty sure they won’t be the last. As long as their so-called smartphones keep making autocorrects that trigger brainstorming sessions, they’ll have enough character ideas and plots to keep them writing for years to come.

This post was first published on the Carina Press blog.